The Graph is described as an indexing protocol built to provide data on blockchain networks, storage networks, and P2P platforms. Through the use of “subgraphs,” anyone can extract data from a blockchain, process it, and store it so it can be easily queried via GraphQL.

According to a new report, Messari reviewed the performance of the decentralized protocol in the last quarter. The blockchain analytics firm considered the protocol’s active subgraphs, the network’s revenue in query fees, and the activity of the network’s indexers, delegators, and curators.

So let’s take a look at the findings contained in the report.

Active subgraphs on the network

Upon its launch, The Graph initially deployed a free hosted service wherein required subgraphs by leading projects in the Web3 ecosystem could be obtained.

In Q1 2021, The Graph launched its first subgraph on the mainnet. Thus, making the protocol “a hybrid of its hosted service and decentralized mainnet” as per Messari.

According to Messari’s report, the protocol had 392 active subgraphs in the last quarter on the decentralized mainnet. This represented a 24% spike from the index recorded in Q1 2022.

On a year-over-year (YoY) basis, active subgraphs on The Graph’s mainnet have grown by 2,350%.

As for the protocol’s hosted service, Messari found that it supported over 24,000 subgraphs in the last quarter.

As opposed to its free hosted service, obtaining data from the protocol’s decentralized mainnet comes with a fee. These fees are often referred to as “query fees.”

Because query fees are priced in USD but paid in the protocol’s native token, Messari found that “query fee revenue earned in GRT is affected by both network activity and GRT price volatility.”

According to Messari, in the last quarter,

“Revenue from query fees increased 36x in GRT terms in Q2 2022 relative to the previous quarter. The increased subgraph usage somewhat offset the GRT price drop in USD terms. With more subgraphs migrating to the mainnet, query fee activity should continue to increase for at least the next two quarters. This may further lead to increased revenue in GRT terms.” 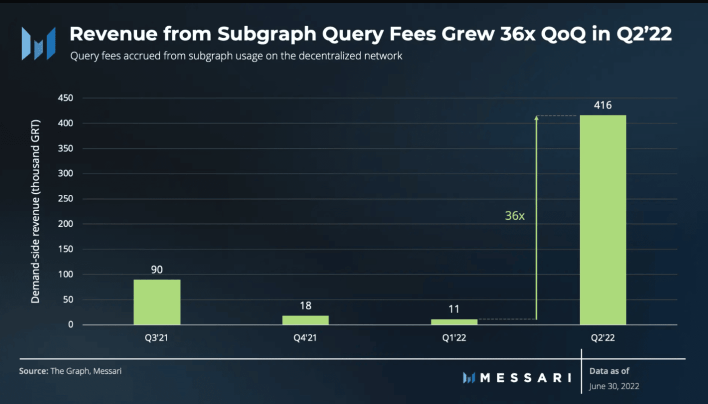 Additionally, to ensure that The Graph runs efficiently, the protocol has indexers (who operate the nodes on the Network), delegators (who delegate the GRT token to indexers, entitling them to a portion of the indexer’s query fees and rewards), and curators (who determine the subgraphs that The Graph Network should index).

According to Messari, in the last quarter, the number of indexers on the network grew by 7%. Delegators grew by 6% and curators by 4%. 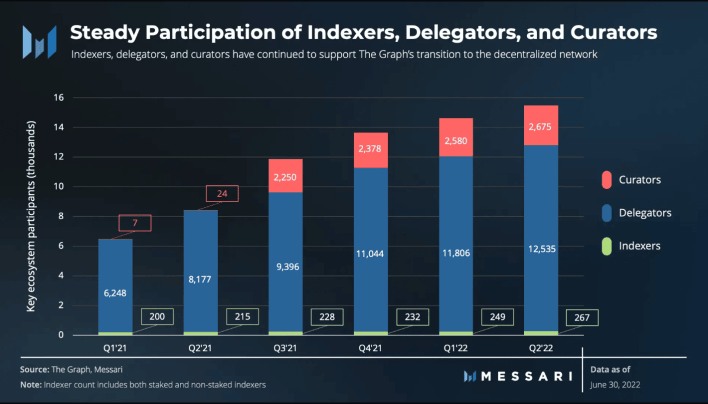 At the beginning of the quarter, the price of GRT was pegged at $0.48. However, in the 90-day period under review, the token’s price declined steadily to be at $0.92 at the end of the quarter. In that period, the token dropped by 80%.

Within the same period, GRT’s market capitalization dropped from $2.28 billion to $635.07 million.